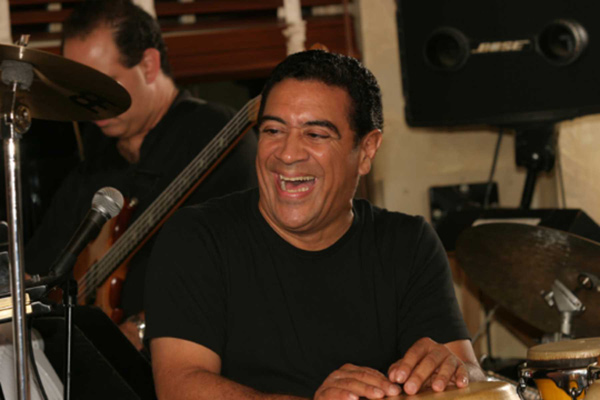 It’s not often that an experienced sideman transitions into a successful career as a leader of one of the most exciting bands in jazz today.  But percussionist Sammy Figueroa has done just that, garnering critical accolades, an enthusiastic fan base and 2 Grammy nominations in the process.

After putting together a band of the best players in town Sammy has not looked back.  Sammy is noted for ‘hosting’ players, composers and arrangers of the highest calbre in his band, including Venezuelan piano maestro Silvano Monasterios bassists Gabriel Vivas, also from Australia,  trumpetist Alex Pope Norris and Australian saxophonist Troy Roberts.  His performances are known for dizzying rhythmical excitement combined with the harmony and beauty of a Pat Metheny or Steely Dan show.  Always entertaining, Sammy’s ebullient humor and cheerful relationship with the public provides an interesting contrast to the complexity and drive of the music.

Sammy is also a popular radio host: ‘The Sammy Figueroa Show’, aired out of South Florida’s WDNA-FM, can be heard every Monday from 11 AM to noon EST, streaming worldwide on www.dna.org.