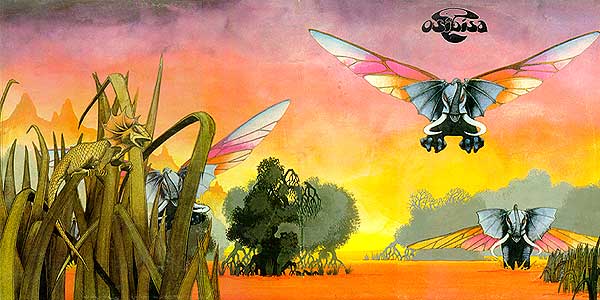 “A rousingly funky hallelujah”– The Independent

“…this is a living and breathing band of soul survivors with plenty of fire left in their belly.”

Osibisa were true pioneers. They were the first band to successfully promote West African styles, not just in Britain but right across the world, and the first African fusion band to notch up a whole series of best-selling singles and albums in the pop charts – with more international hits than any other African band has enjoyed since. They were formed nearly two decades before the term ‘world music’ was invented, but their leader Teddy Osei can rightly claim that they opened the way for the global fusion scene, and for the success of later African stars, from Youssou N’Dour to Salif Keita.

They were one of the most experimental bands of that decade of experimental music, the Seventies, because – as this timely new collection shows— their highly original style made use of a whole range of different influences. The Osibisa mix of what they called “criss-cross rhythms that explode with happiness” naturally included Highlife influences from Osei’s homeland of Ghana, along with jazz, rock, calypso and other Western Indian Styles, along with a dash of disco and unashamed pop. They were a band who could hold their own alongside the rock stars of the era, supporting the Rolling Stones or Pink Floyd (whom Osei delightedly remembers for a show at the Roundhouse in London where they were “frying eggs on stage, to mix in with their sound – it was incredible!”). They toured the world, enjoyed success from America to Australia and India (where they notched up another best-selling album), and even played alongside Bob Marley at the Zimbabwe independence celebrations.

But in the Eighties it all suddenly changed, as these pioneers of the new global music scene fell from fashion just as the ‘world music’ movement was beginning to gather momentum. The band battled with record companies who wanted them to abandon their African influences and play disco, while hardcore fans of ‘authentic’ African sounds were put off by those earlier pop hits. No matter. The band kept going, and they are still going, 40 years on, with a repertoire of very different songs, and an incredible history to look back on.

The story starts in the town of Kumasi, in Ghana, West Africa, where Teddy Osei, the son of a gold and brass smith, started playing flute and drums at the age of 9, after being encouraged by a school-teacher. Later, after studying architecture, he began working as a building inspector (“a great job! They gave me a motorbike and l drove around town checking on new buildings”),  but his life changed the day that he stopped off at a friend’s house to discover that his father had acquired a large collection of instruments, that he had once played in a local Salvation Army band. He and his friend “started messing around with them” and went on To form a band, with Teddy at first playing drums, and Then switching to saxophone after Their sax player failed To Turn up for rehearsals. He taught himself by “just playing, and listening to jazz heroes like Duke Ellington and Count Basie – all the great guys – and Trying to imitate what they were doing”. He formed a band, The Comets, who specialised in the exuberant dance style of Highlife, The great popular music of Ghana that can be played by orchestras or guitar bands, and that was influenced by the osibisaba rhythms from southwest Ghana, from which Osibisa would later take their name.

Teddy’s band mixed their Highlife with jazz and with a variety of Western styles, because, he explains, “There were many ex-patriots from England or Germany in Ghana in The late Fifties, in the period just after independence, and they wanted to hear quicksteps, waltzes or foxtrots”.

The band were semi-professional, but they “had 5 or 6 hit singles in Highlife, in our own language”, mostly recorded at a radio station that then boasted the best studio in the country, and they developed a following right across West Africa. Even so, Teddy was determined to do even better, and in 1962 he moved To London to study music and drama. Life wasn’t easy. There were, he remembers “not many Africans in London at that time- it was mostly West Indians – and it wasn’t easy finding work”. But he managed to get a job washing dishes at the Grosvenor House Hotel in Park Lane (“The posh one!”) and was delighted to learn that his country’s first President, the left-wing Kwame Nkrumah, had done exactly the same thing when he had been a young student in London.

Nkrumah was keen to promote his country’s culture, and after he had spent 2 years in London, Teddy was offered a scholarship by the new Ghanaian government, so he could study music full Time. Fela Kuti, who would later become Nigeria’s greatest star, was in London at the same time, also studying music, and Teddy remembers “he was doing the same as me. We both had bands and played for the other students”.

Teddy’s life changed, dramatically, when Ghana’s President Nkrumah was overthrown in a CIA-backed coup in 1966. His music scholarship was cancelled, and once again he was forced to ﬁnd a job. Acting presented few opportunities “because as an African I was only being offered little roles, like playing a servant” so he decided to become a full-time musician. He started out with a band called Cat’s Paw “playing covers of James Brown and Wilson Pickett, and a bit of Highlife”, but decided to change his style after being offered a two-month residency at a hotel and restaurant in Tunisia.

It was here that Osibisa was born. Teddy was joined in North Africa by two other Ghanaians, both of whom had worked with him in The Comets: his brother Mac Tontoh, who played trumpet, and drummer Sol Amarifo. He found that “being back on African soil after so many years away meant that more African ideas and songs started coming into the music”, and when the trio returned to London they set about recruiting a new bond to put their ideas into practice. ln the ﬁrst Osibisa line-up they were joined by a Nigerian percussionist and three West lndians, including the rock-inﬂuenced guitarist Wendell Richardson.

The new band were inﬂuenced by Highlife and those “criss-cross rhythms” from their homeland, but their new fusion style also included a dash of calypso “which was very big in Ghana”, along with rock guitar solos, and the jazz influences in Teddy and Mac’s brass work. They wrote their own songs, and found that their new musical style appealed to young rock fans “so we started playing on the London underground rock scene, playing at clubs in Soho and supporting rock bonds at venues like the Marquee. Our audience were all white guys- there were very few Ghanaians around!”. lt was, he remembers “a time when young people had more of an international outlook than they have now. They were trying to learn about music from other parts of the world”.

The band succeeded because they were enthusiastic, original, and exciting. When l saw them ﬁrst, playing at the London Roundhouse in July 1970, l was so impressed by their mixture of percussion and brass, and their full, tight sound, that l reported excitedly in The Guardian that ‘they deserve to be very big here’.

Happily l was right, for there were many others who agreed. They were signed by the management term of Gerry and Lillian Bron, best known for their association with heavy metal band Uriah Heep, and their first album was produced by Tony Visconti, famous for his work with David Bowie and T. Rex. The album’s art work, with the celebrated Osibisa logo of a flying elephant, was provided by Roger Dean, who became a rock world cult hero thanks to his sleeve designs for Yes. Within a year of that Roundhouse show, Osibisa had become a success, both here and in the States, and for the rest of the Seventies they would continue to sell records by the truck-load, and continually change styles.

This compilation, with songs specially chosen by Teddy, tells their remarkable story. It includes their first instrumental hit single, the jazzy and driving Music For Gong Gong, that appeared on their debut album, Osibisa, a best-seller on the pop charts in both the UK and USA in 1971. Ayiko Bia, taken from the same album, is another track that shows the early Osibisa at their very best, with its unique blend of African chanting, jazz saxophone and rock guitar. Then there’s the softer-edged Woyaya, another UK hit in T971 that would later be covered by Art Garfunkel, and there reminders of the band’s best-selling excursions into the pop mainstream, with their Highlife-influenced party favourite Sunshine Day (1975), the easy-going Dance the Body Music (1976) and the novelty track Coffee Song (1976). It upset critics in the UK who felt they had moved too far from their African roots with song that had been recorded by The Andrews Sisters in The Forties (and was later covered by Frank Sinatra), but it brought them yet another hit single. And as Osei remembers “the Americans liked it, it reached #2 in Holland, and audiences always ask for it when we play in Africa.They even liked it in Brazil!”

Yet another side of the Osibisa musical mix is demonstrated with their treatment of South African songs, from l Feel Pata Pata to the upbeat version of Nkosi Sikeleli Africa, which was originally a hymn before it became a National Anthem. As for the final three tracks, they serve as further reminders of the way Osibisa could mix African styles and jazz. Listening to these songs again, it seems remarkable that the band faded from fashion just as ‘world music ‘emerged. They really were there first, and their music is still worth celebrating.